Barter Books is highly recommended! It is an experience, rather than a book shop. Enjoy the incredible surroundings and cosy atmosphere. Why not snuggle up in front of a fire while testing out your new book or simply reading a paper while enjoying the lovely food and drinks on offer? Barter Books is world famous, deservedly so, and is child and dog friendly too! “Back in April 1991, and in the face of a rather large overdraft, Mary Manley decided to open a secondhand bookshop – one that would be based on the swap system and called Barter Books. Her husband, Stuart, immediately took to the idea and suggested that Mary open the shop in the front room of what was then his small manufacturing plant, located in Alnwick’s magnificent old Victorian railway station. From that time a joint partnership was formed that would eventually result in what the New Statesman magazine would call ‘The British Library of secondhand bookshops’. The shop has many extra features: open fires in the Winter, beloved by all; the Station Buffet with good plain food, coffee, tea and cookies; a model railway acting as a link between the book columns of the central room, along with poetry lines; three stunning 40-foot murals.; a mini-cybercafé (well, two computers!) and free wi-fi; numerous restored station features; generous seating; a children’s room with enough toys to allow parents and grandparents to browse elsewhere in peace – provided one guardian is left to look after the children; and a whole huge room lined with over forty glass cases containing many of the more interesting antiquarian books. A short history of the ‘Keep Calm and Carry On’ poster! After being forgotten for more than half a century, a rare original of the now famous WWII poster was rediscovered in a box of old books bought at auction in one of the largest and most popular secondhand bookshops in Britain – Barter Books. When the bookshop owners had the poster framed and put up in the shop, customer interest was so great that in 2001 the couple started producing facsimile copies for sale – copies which were soon copied and recopied to make of the Keep Calm poster one of the first truly iconic images of the 21st century.”

The Cheviot Hills are just a few miles from Budle Bay Croft, and are located in the north of the Northumberland National Park. They mark the border with Scotland and offer a wild, romantic landscape of rounded hills and valleys. A picnic and a paddle in the Breamish valley or the Harthope valley is a traditional day out trip. You can share the shallow, clean rivers with dippers and otters, and even park your car and sit close by on the riverbank. For the more energetic, there are any number of walks and walking trails in the Cheviot Hills and surrounding areas – with varied distance and difficulty. And if you fancy getting the best out of the geography, you could join one of the guided walks with Footsteps, Navigate Northumberland or  Shepherds Walks.  And why not stop off at the Percy Arms Hotel in Chatton for some delicious local food on the way home? (https://percyarmschatton.co.uk | Review in Northumberland Gazette)

Cragside is about 45 minutes drive from Budle Bay Croft, and certainly well worth a visit. The home of Lord Armstong, world famous Victorian inventor, landscape genius and innovator, Cragside was truly a marvel of its time. This is the house where modern living began, with first examples of central heating, dishwashers and rotisseries, to name a few of the many early inventions – in fact it is crammed full of ingenious inventions and gadgets, many still working today – and in Victorian times, this would have wowed as a house of the future! This was also the first house in the world to be lit by hydroelectricity, reinstated with the recent addition of an Archimedes screw. This is a 17 metre long galvanised turbine weighing several tonnes, recently officially started by local favourite Robson Green as seen in ITV’s More Tales From Northumberland.  The Archimedes screw produces enough energy to light all the bulbs in the house, and enables Cragside to re-tell the story for which it is now famous. You can view this modern turbine system near Tumbleton Lake.  The Cragside gardens are also incredible and children will love the adventure playground and exploring Nelly’s Labyrinth!

Bailiffgate Museum and Gallery in Alnwick is housed in what was previously a church close to Alnwick Castle, it has also been recognised as one of the 25 best places in the country for early years children to visit. Great for families there is lots to enjoy for adults too, detailing the stunning county and characters of Northumberland.

Ford and Etal is a great place to spend a day. Just a few miles from Budle Bay Croft, you can explore the corn mill, walk the Flodden battlefield, ride on the steam train, cycle and walk, climb, enjoy afternoon tea, wander the estates or view the stunning pre-Raphaelite paintings. Truly something for everyone.

After visiting one of the many attractions at Ford and Etal, why not stop off for a glass of champers or a coffee and homemade cake at The Old Dairy?  https://theolddairyinford.co.uk. This quirky concept store is full of vintage finds and architectural antiques and is worth a browse for that unusual holiday keepsake.

Flodden was the site of a major and brutal battle between Scotland and England on September the 9th, 1513. The armies of James IV of Scotland and the Earl of Surrey fought on the slopes of Branxton Hill for 3 hours. By the end, King James, his nobel men and 10,000 Scots lay dead. Today the battlefield is marked by a granite cross. Perhaps the world smallest visitors centre in a decommissioned phone box offers maps, history and other interesting information. (https://www.flodden.net/about)

Hadrian’s Wall is one of Britain’s greatest landmarks and is a World Heritage Site. It stretches across Northern England from the Ravenglass on the west coast of Cumbria, to Wallsend in Newcastle Upon Tyne. Hadrian’s Wall has something for everyone – of course the world class archaeology, but also spectacular landscapes, vibrant cities, utter solitude, great pubs and people, and of course, abundant wildlife. Hadrian’s Wall can be visited as a day trip from Budle Bay Croft, especially the interesting Vindolanda which is only 90 minutes away. In an interview with American magazine Rolling Stone, author of Game of Thrones (GoT) George R.R. Martin said it was the Northumberland landmark which first got him thinking about the plot and inspired The Wall, an integral part of the series. Martin said “The Wall predates anything else. I can trace back the inspiration for that to 1981. I was in England visiting a friend, and as we approached the border of England and Scotland, we stopped to see Hadrian’s Wall. I stood up there and I tried to imagine what it was like to be a Roman legionary, standing on this wall, looking at these distant hills. “It was a very profound feeling. For the Romans at that time, this was the end of civilisation; it was the end of the world. We know that there were Scots beyond the hills, but they didn’t know that. It could have been any kind of monster. It was the sense of this barrier against dark forces – it planted something in me. But when you write fantasy, everything is bigger and more colourful, so I took the Wall and made it three times as long and 700 feet high, and made it out of ice.” In the TV show, The Wall is a massive fortification which stretches for 300 miles along the northern border of the Seven Kingdoms, defending the realm from the wildlings who live beyond. The Wall is reported to be over 700 feet tall and is made of solid ice. GoT fans visit and experience how George R.R. Martin felt – the profound sense of enormity and fear of the unknown that Roman centurions faced every day, not knowing what lay beyond the Wall. Hadrian’s wall staff wear black cloaks like those worn by the Night’s Watch in the TV programme. They not only keep staff warm, but are available for the staunchest of GoT fans to recreate their own favourite ‘wall’ moment at Housesteads Roman Fort in Northumberland.  Go on. You know you want to!

The Kielder Observatory is only 2 hours drive through breathtaking scenery yet offers perhaps the best views of our sky in Europe. Although the night scape at Budle Bay Croft is fantastic (we have the Dark Sky Friendly Award), the views from Kielder observatory are simply astonishing. Kielder Observatory is a public outreach astronomical facility located in Kielder Forest, in some of the darkest skies in Europe and the third largest protected Dark Sky reserve in the world. Located in Northumberland, England. It is situated just half a mile from the Scottish border on Black Fell near James Turrell’s Kielder Skyspace. The site was chosen as one of the locations in the UK which has the least amount of intrusive light pollution.

Howick Hall and Gardens is a great place to visit while walking the coastal route. Close to Craster, the Hall is the home of Earl Grey tea, and the gardens are amazing, voted top 5 coastal garden in the UK. There is a newly opened family trek through the grounds, and after you have worked up an appetite, how about afternoon tea in the Earl Grey Tearoom – highly recommended!

Walk part of the incredible St. Cuthbert’s Way – very easily accessible from Budle Bay Croft, this historic walk can be completed in sections, or you can enjoy any of the 24 shorter walks. Ranging in length from 1 to 8 miles, and spread out along the whole length of St. Cuthbert’s Way, the short walks showcase some of the best of the long distance walking route and offer opportunities to explore the surrounding countryside, historic sites and other features of interest in the Scottish Borders and Northumberland. The walks have been developed to provide something for everyone, whatever your interests, age or level of fitness, and to appeal to local people as well as visitors. Each walk includes a section of St. Cuthbert’s Way, but beyond that the walks vary considerably, from a short stroll or sheltered riverside walk suitable regardless of the weather, to more exposed hill walks which are best appreciated on a fine day. Each route is achievable in half a day, but how long you take is up to you, depending on how fast you walk, and how long you have to stop and enjoy the fantastic views, historical sites and other features along the way. The routes are described west to east along St. Cuthbert’s Way – the direction most people choose to walk the long distance route, but
there’s nothing to stop you reversing the route description and walking in the opposite direction.

Copies of the St Cuthbert’s Way Official Short Walks Guide are available from the online shop. Profits from the sale of the guidebook will be reinvested on future maintenance of St. Cuthbert’s Way. 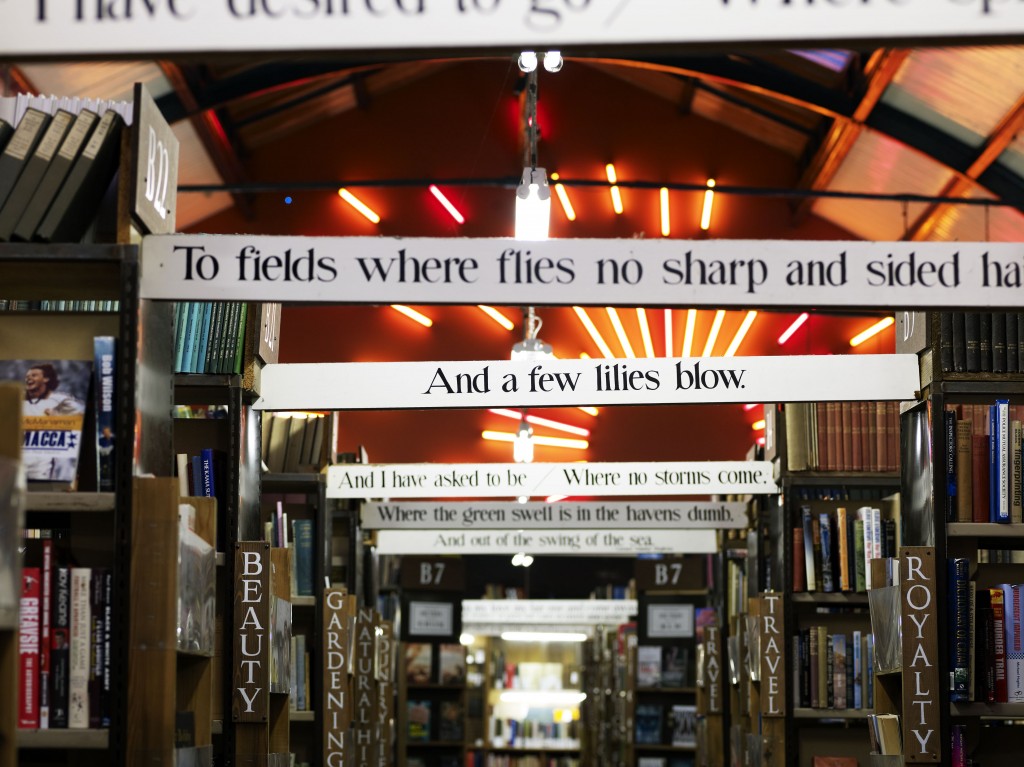 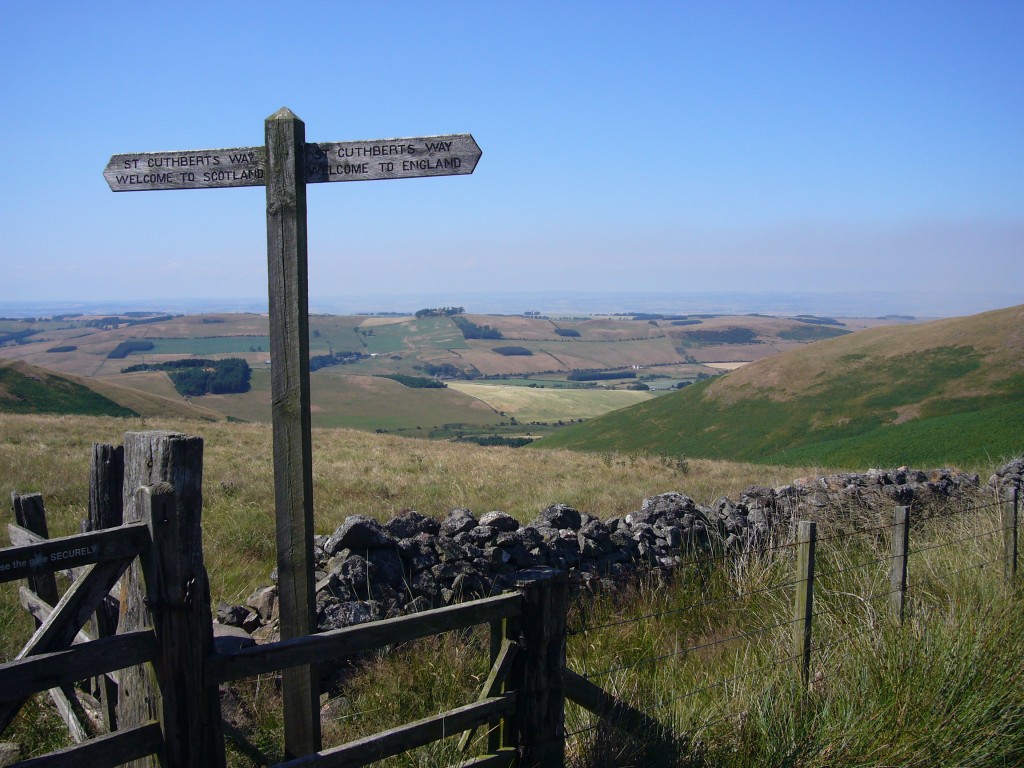 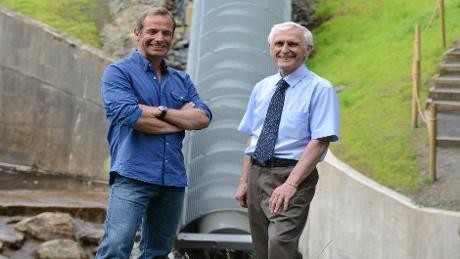 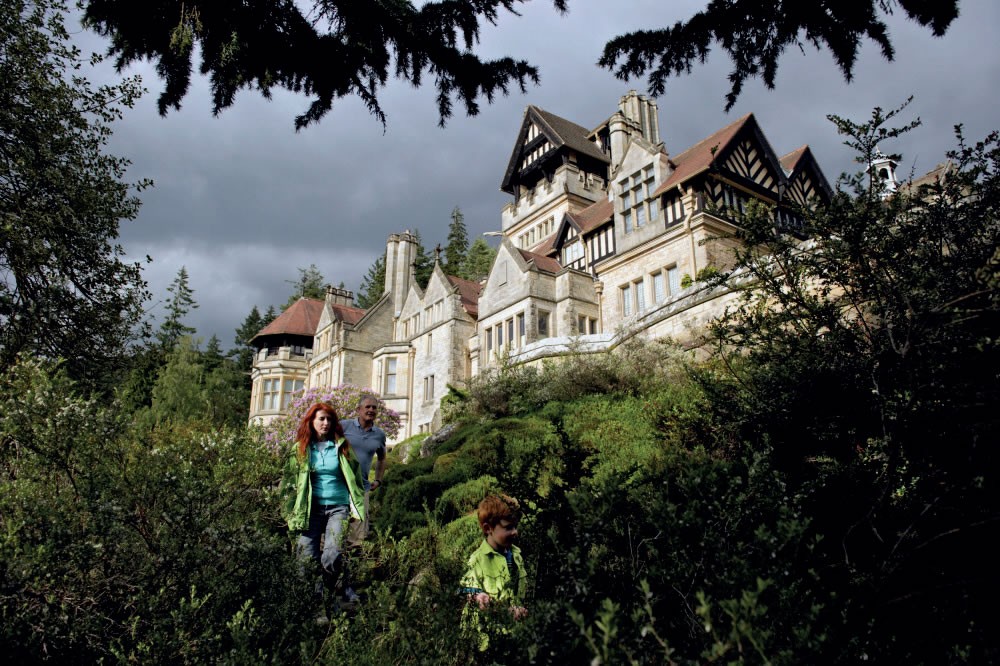 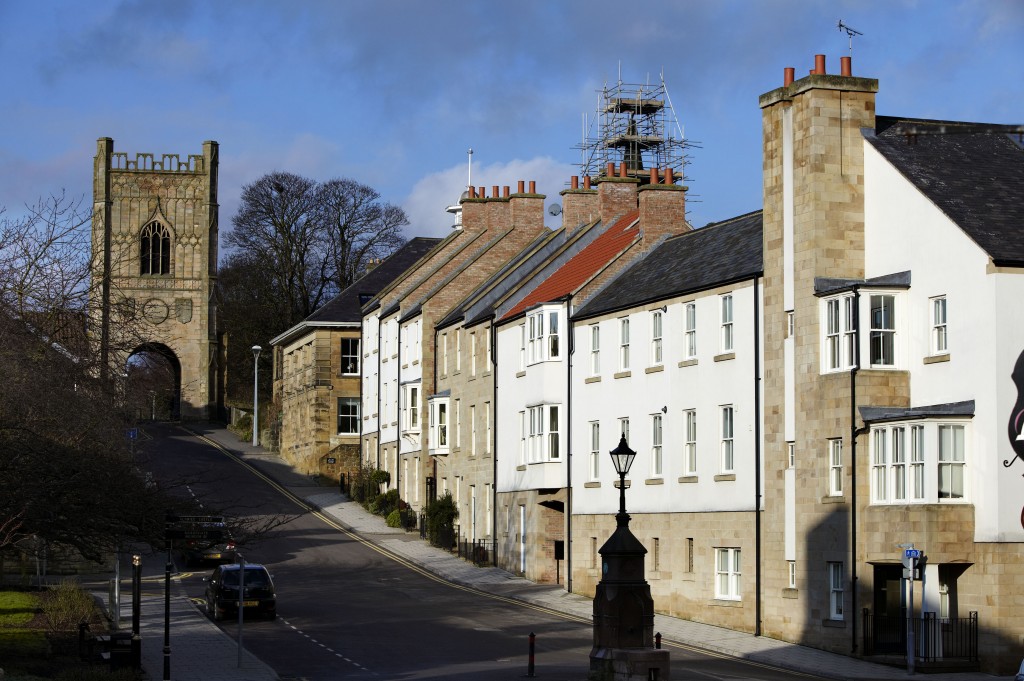 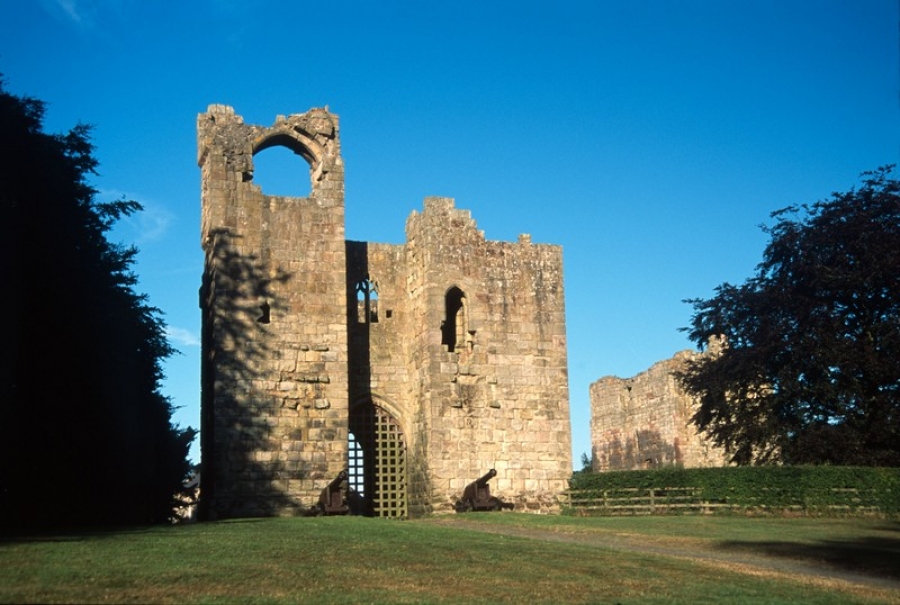 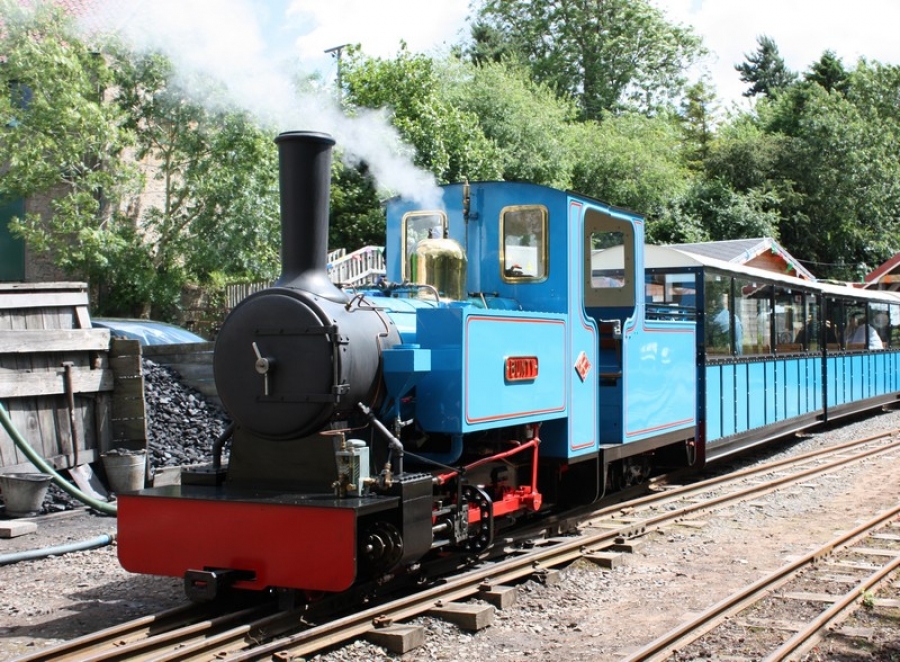 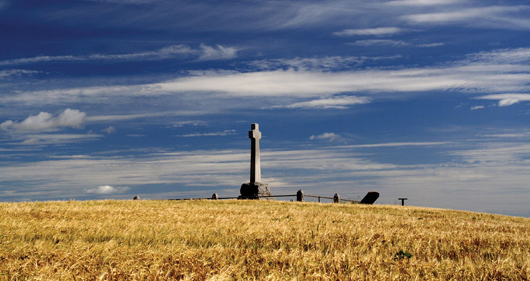 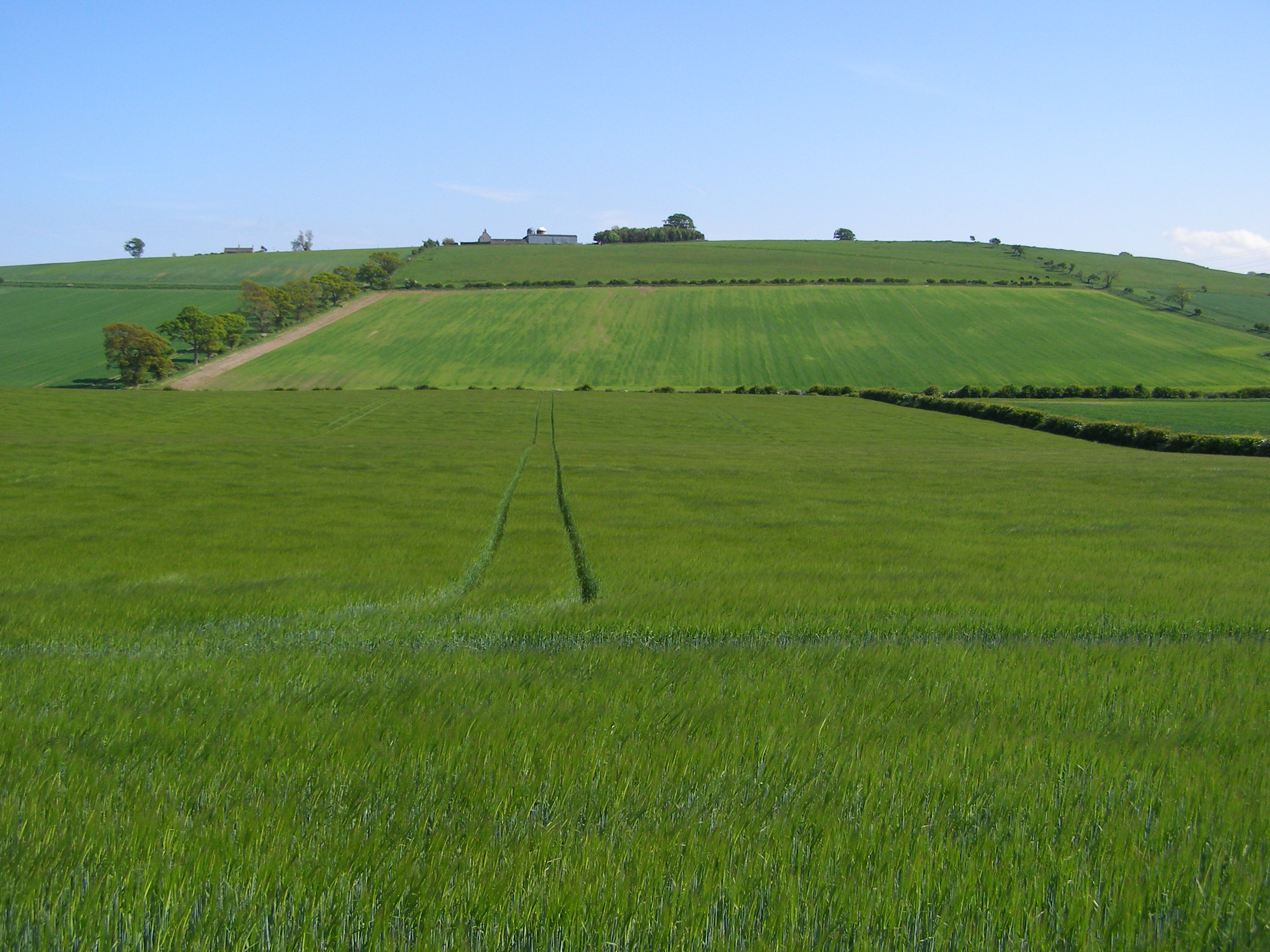 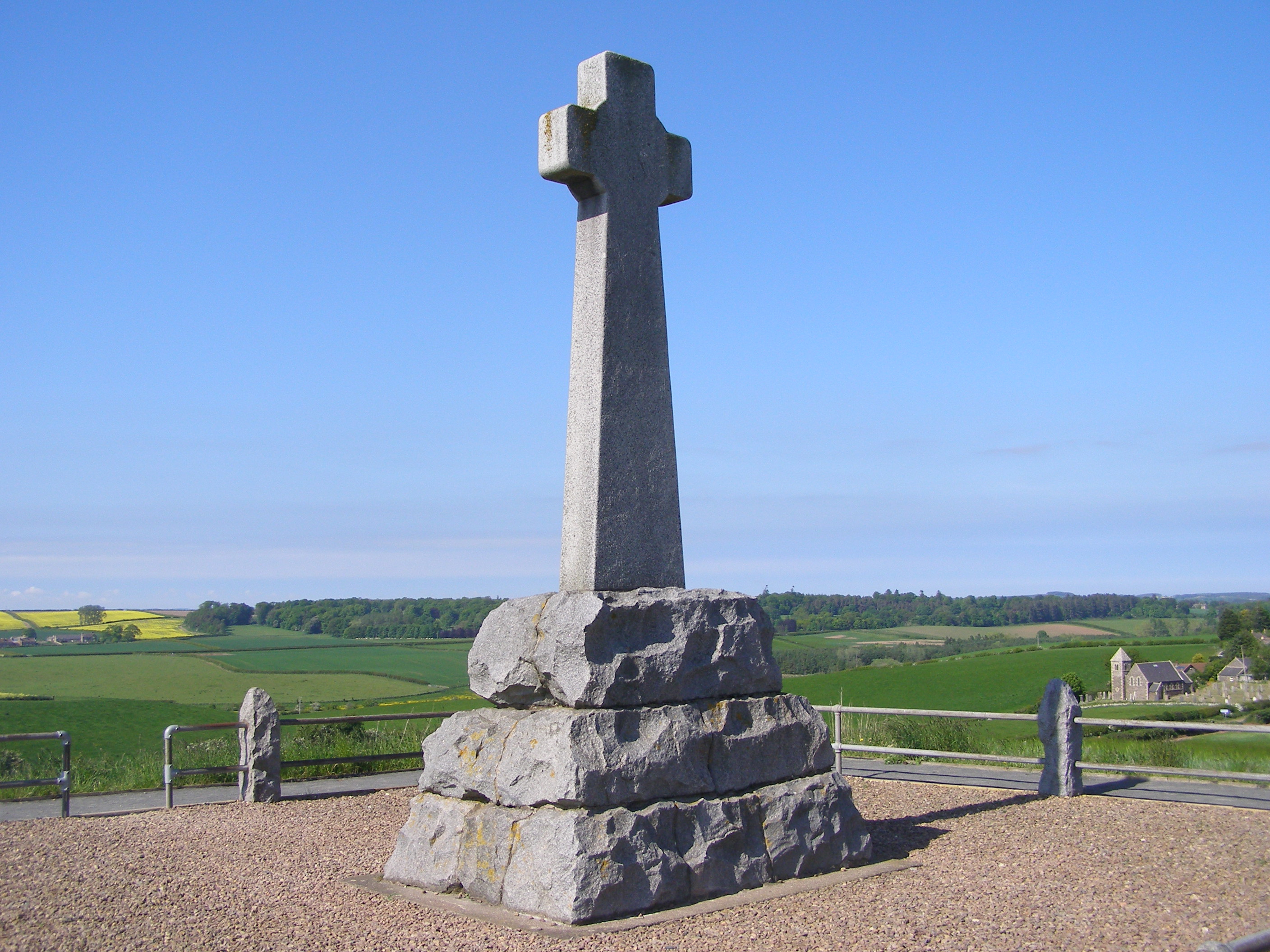 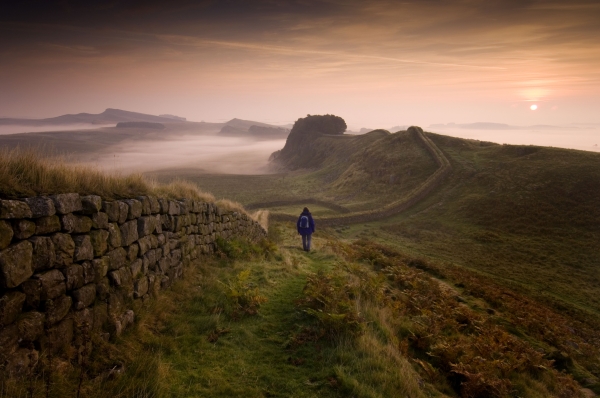 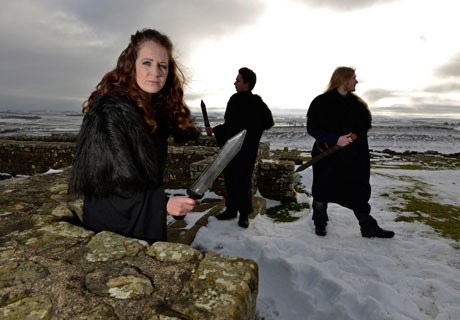 English Heritage staff at Hadrian's Wall in their cloaks 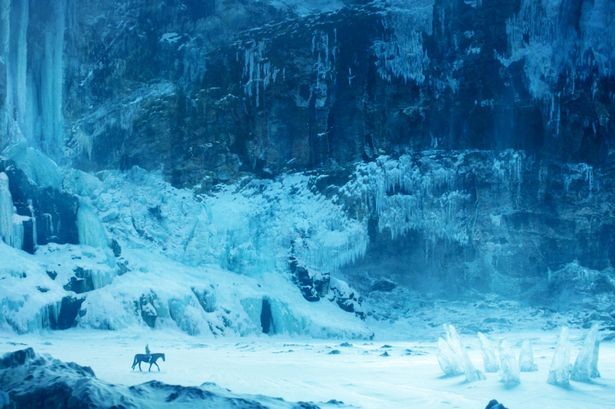 The Ice Henge Sculpture on Game of Thrones 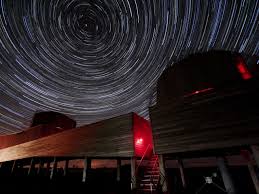 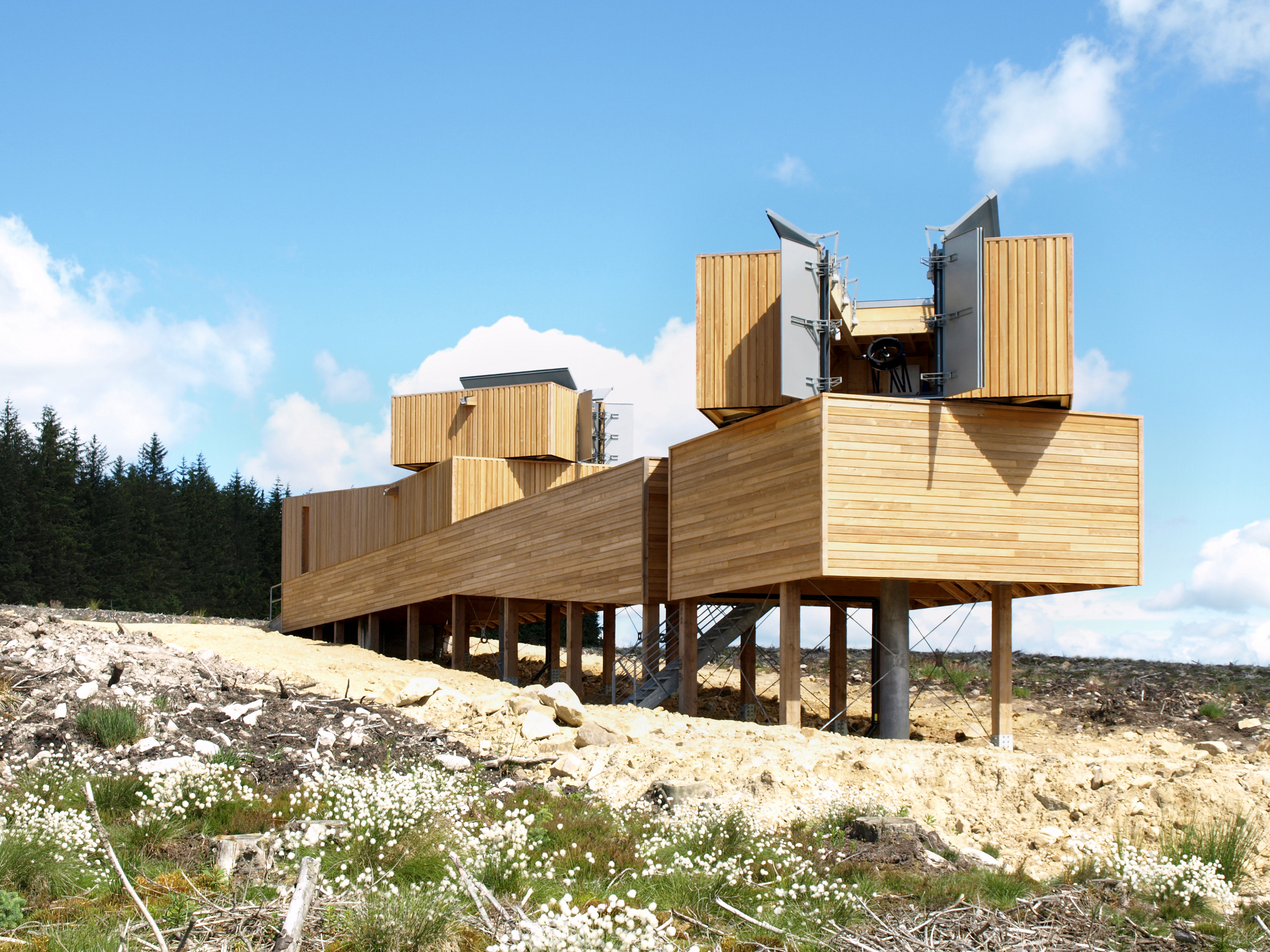